Reader: “When he came to the village of Nazareth, his boyhood home,”

Response:  “he went as usual to the synagogue on the Sabbath.”

Then Jesus returned to Galilee, filled with the Holy Spirit’s power. Reports about him spread quickly through the whole region. He taught regularly in their synagogues and was praised by everyone.

When he came to the village of Nazareth, his boyhood home, he went as usual to the synagogue on the Sabbath and stood up to read the Scriptures. The scroll of Isaiah the prophet was handed to him. He unrolled the scroll and found the place where this was written:

“The Spirit of the Lord is upon me,

for he has anointed me to bring Good News to the poor.

He has sent me to proclaim that captives will be released,

that the blind will see,

that the oppressed will be set free,

and that the time of the Lord’s favor has come.”

He rolled up the scroll, handed it back to the attendant, and sat down. All eyes in the synagogue looked at him intently. Then he began to speak to them. “The Scripture you’ve just heard has been fulfilled this very day!”

One thing to remember is that this passage comes from the very beginning of Jesus’ public ministry. Following his temptation by the devil, Jesus, filled with the power of the Holy Spirit headed north to the region of Galilee to speak in various synagogues. Interestingly, Galilee was a region containing both Jews and Gentiles. So from the outset, the proclamation of the gospel extended beyond the Jews which was not what they expected or wanted.

Jesus went first to Nazareth to preach in his hometown synagogue. The family was well-known in the synagogue since they attended Sabbath very regularly all Jesus’ growing up years. Now, our grown up “hometown boy” reads from the Torah, specifically the prophet Isaiah. Not only that, he reads a messianic passage and stops abruptly, rolls up the scroll, gives it to the attendant who puts it back in its case. Jesus then sits down with everyone staring at him. What follows astonishes all the people and then this hometown boy claims to be the fulfillment of the messianic Isaiah prophecy he just read!

There was a mild discussion among the Nazarite villagers. These were people who knew Jesus as a boy. They knew Mary and Joseph, his carpenter father, his four brothers Simon, James, Judas, Joseph, and his sisters. They noted how graciously he spoke. But as he spoke, he reminded them that Elijah ministered to a foreigner in a non-Jewish land and that Elisha did the same, to an enemy Assyrian soldier no less!  In their minds, God and his coming Messiah was only for the Jews, not the “dog” foreigners.That did it, the hometown people mobbed him, intending to kill him. Jesus slipped away. The hometown boy had spoken blasphemy!

Let’s make some observations about this passage. It’s important to understand the region of Galilee because it tells us some of Jesus’ thinking and ministry and helps us understand the gospel a little better. The people of Galilee, living about ninety miles north of Jerusalem, were outcasts as far as the Jews in Judea were concerned. Jerusalem was the home of the magnificent Temple. Furthermore, there was a significant Gentile presence of the hated Greeks and Romans in Galilee. There were also remnants of the disastrous Assyrian days. The inhabitants had a “curious” uncultured accent in their speech. They were generally uneducated and poor. Yet it was to these people that Jesus went first. In fact, Jesus moved from village synagogue to village synagogue teaching the preaching all throughout the Galilean region healing the sick, curing the blind and lame, casting out demons, and healing all sorts of diseases. . .except in Nazareth where he could do no miracles due to their lack of faith.

Notice in the map below where most of Jesus’ miracles occurred. Notice also how many “foreigners” he healed and how he moved beyond the confines of Judaism. Much of his ministry occurred in Galilee. 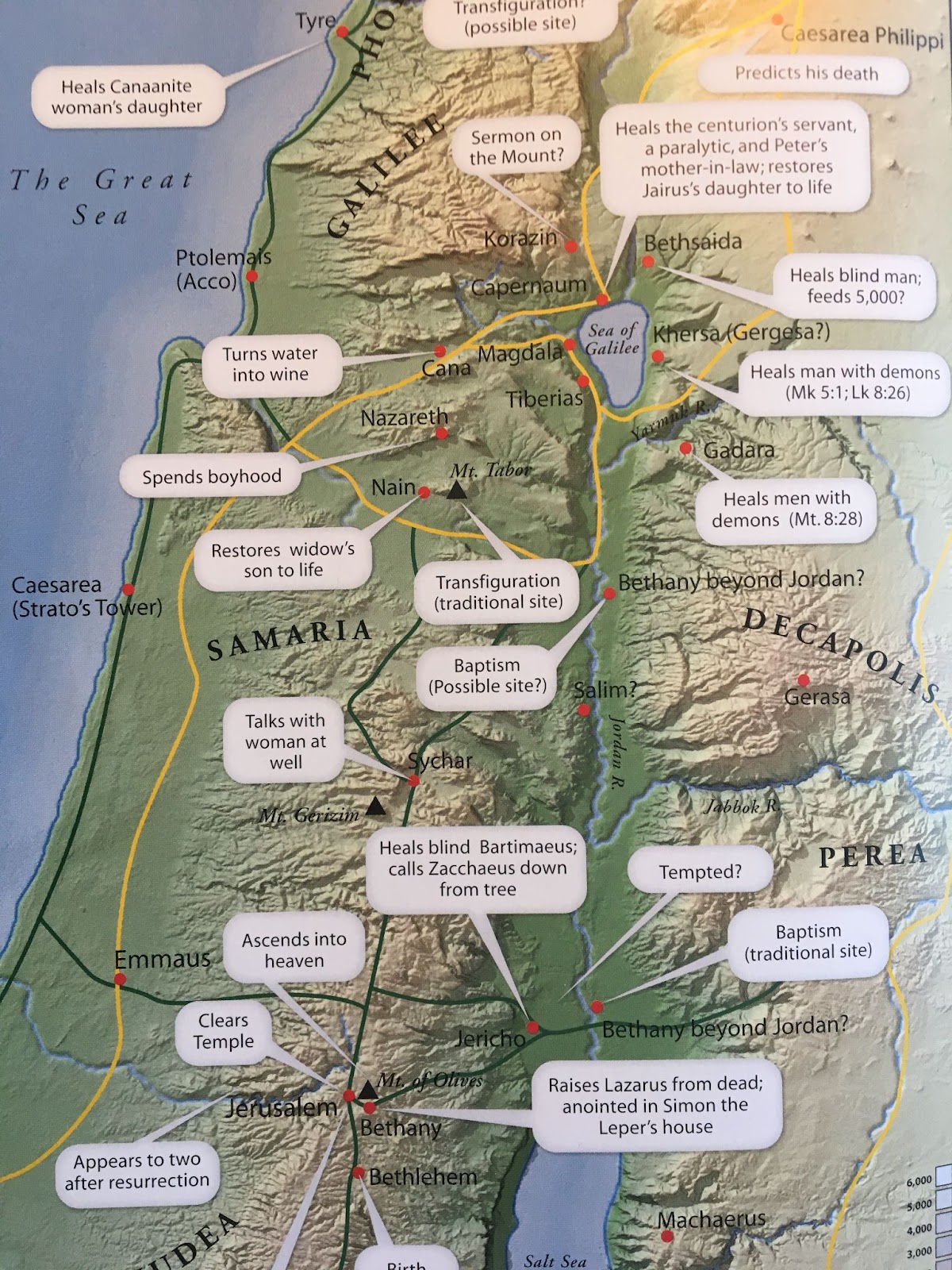 We are reminded in this larger picture that Jesus came for all human beings. Christianity is the most inclusive faith in the world. It is blind to skin color, cultures, wealth, class,   level of intelligence, and freely offers salvation to all men, women, and children. God’s desire is that every person who has ever lived would come to him through Jesus his Son, the only way to the Father.

Sometimes when we live in “Nazareth” we fail to see what is right in front of us because we have preconceived ideas of what should be. I pray that this account from the very beginning of Jesus’ earthly ministry in his hometown synagogue may not be repeated in our lives as his ministry continues to and through us these days. He lives and works in us, and his message is still the same, repent and believe.

Music: “God Is Working His Purposes Out”    Melharmonic Virtual Choir

Prayer:Lord God, you have made all peoples who were reborn in Christ a royal and a priestly race; grant us both to desire and to be able to do what you command, that having called your people to eternal life, they may have one faith in their hearts, and one law of love in their lives. Through Christ our Lord. Amen.    ―Gelasian Sacramentary, In the Presence of My Father, p.200